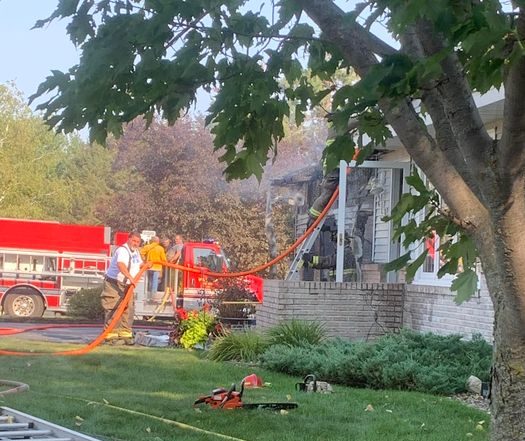 WADENA, Minn.– The Wadena Fire Department was called out of the second straight day Tuesday to respond to a rekindled fore that crews put out the day prior.

On Monday, the Wadena FD was dispatched at 4:14 p.m. to a report of a residential structure fire at 10455 Mohawk St, in Wadena Township. Upon arrival, fire personnel observed an attached garage fully engulfed, and fire quickly spreading to the living area of the house. Firefighters gained access and quickly extinguished the fire. Crews were on scene for approximately two hours.

On Tuesday at 2:53 a.m., fire personnel were called back out for a rekindle in the garage. Firefighters were able to extinguish the hot spots and were on scene for 1 hour. The fire was believed to have started from staining rags that were recently used that spontaneous combusted inside the garage. The house and garage received severe damage. There were no injuries to civilians or firefighters reported.
Along with the Wadena FD, their crew was assisted by Bluffton, Deer Creek, and Verndale Fire Department’s, Wadena Police Department, Wadena County Sheriff’s Office, Tri County Health Care EMS, and Todd-Wadena Electric according to the department’s Facebook page.